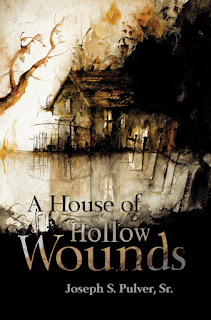 Into the briar of harsh doubts this writer suffers (and clubs himself w/ everday), it's wonderful to read what I just read. THXxxxxxxxxxxxxxxx S.j.Bagley!!!!!!!! You have immensely brightened my day.

What follows is what he posted --


"i've read quite a bit of literature and quite a bit of that reading has been work that could be called 'horror.'
and in that reading i have read work from any number of writers that are not simply good, but great.
writers who have something interesting to offer philosophically, aesthetically, and contextually....
one of those great writers is, without a doubt, joseph s. pulver, sr.
i have honestly never seen a writer able to work in an area so grimly combining horror that is both cosmic and personal with the trappings and philosophy of crime and noir fiction.
pulver's work takes place in a world where the idea of 'morality' is as quaint as the idea of a 'caring universe' and, yet, the ideas of pathos and empathy are still important.
in pulver's work, terrible people do terrible things and tend to be fully aware of just HOW terrible everything is.
it's a cold and dark world with small but powerful emotions lighting the way forward.
(and his understanding of poetics, not just in his own work but in the wider realm of poetry, is second to none.)
in short- he's a writer you should be reading. "


I'm floored and deeply humbled by his praise. As you would expect, very thankful!! !