My newest autumnal sonatas step out of the grey rooms 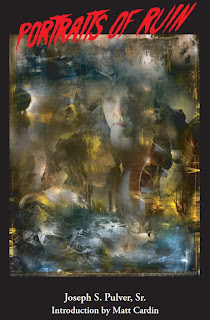 "Decay flutters up on black wings" -- Georg Tralk "ON THE MOOR"

Just in time for the moon-bright translations of autumn my newest collection, the third from Hippocampus Press, PORTRAITS of RUIN, was released today.


"Let us posit that Bukowski is the sun. Or Brautigan, Burroughs and the Beats -- a solar Coney Island of the Mind where Timothy Leary’s dead and dead Cthulhu waits and sings the live long daydream believer. Then Joe Pulver’s Portraits of Ruin would be the burst of planets, Big Bang-Bang, Marquee Moons hanging on for what they got, scream of consciousness -- in Outer Space no one can hear it . . . except Coffin Joe, Monster Mash Potato that big ol’ Portraits of Ruin -- Mars needs it, you need it, so just open the lid and shake your fist -- then say: "They kill horses, horses, horses, horses." Thank you. Come again?" -- Thomas Ligotti

"All writers are influenced and inspired by other writers, and we all know writers who echo those influences, running the gamut from subtly to obviously, but I don't think I've ever read an author who is capable of blending/bending his influences quite like Joseph S. Pulver, Sr. As impacting as a violent train wreck, the resultant explosion of mellifluous ethereality onto the page is something so totally different that it's almost a completely new art form. Sure, you've got your Lovecraft, Robert W. Chambers, Ramsey Campbell, William Burroughs, Richard Brautigan, Raymond Chandler -- even T. S. Eliot -- but jam them all together into Pulver's psychotic centrifuge, and the resulting velvet-swathed, running-the-guts spatter pattern ends up as a collection like Portraits of Ruin."--Walt Hicks Hellbound Times